This is the 6th in a series of articles that friends encouraged me to write after returning from a trip to Bosnia and Croatia in January and February 2011.  These articles chronicle people’s generosity and kindness, my emotions and experiences.  This article will focus on the wonderful memories I brought home from Zagreb from January 31 to February 6. I’ve posted a few photos here.  The complete collection is here.

In the first article of this series, I recounted my tough journey getting to Bosnia that ended delightfully with a 3-imam escort into Sarajevo.  You may find it noteworthy, I sure did, that the woman in the seat right in front of me on the bus leaving Bosnia was a nun!  Make of it what you will, but it seemed another wonderful sign that I was on the right path.  Not only that, but when we re-boarded the bus after a quick lunch stop for the drivers, “Da sutis” my all time favorite Bosnian pop song sung by Dino Merlin was playing on the speakers.  It felt like someone from above was giving me a huge musical hug.  Simply wonderful!

The bus climbed up the hills outside of Bihac to emerge onto a broad flat plain, a different world in so many ways.  We crossed into Croatia at the border with no problems at all.  As the bus drove on we saw the first welcome green grass, a relief after weeks of white.

Amina Alijagic was waiting for me at the Zagreb bus station on Monday, January 31.  Amina, who I met in Seattle when she was visiting family several years ago, is a board member of Preporod, the Cultural Association of Bosniaks in Croatia.  Through her kind endorsement, Preporod had invited me to perform in concert with their choir Bulbuli: http://bulbuli.net/#/ozboru/.  The generosity, hospitality and kindness I was given by Amina, Preporod’s President Senad Nanic, its members and Bulbuli is hard to describe, but I will do my best.

We grabbed a cab for the short and expensive drive to Hotel Jadran where we were both guests of Preporod.  Located in the center of Zagreb it was the perfect location.  We were within walking or tram distance of everything and our rooms were located on the back of the building so were very quiet.   We had a quick rest before heading to the Preporod office just past the central Jelacic Square.

Ajka writes in the concert details

The administrator Ajka, who greeted us warmly, was putting the finishing touches on the poster for the concert to be held the following evening.  As she did so, I had a good look around the office.  The first room you enter after walking up a flight of stairs is filled with literature including their excellent “Preporod Journal.” 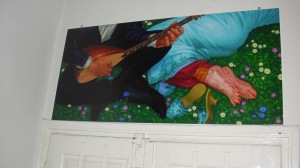 The walls of the large conference room are hung with beautiful Islamic art including the original painting used as Bulbuli’s CD cover, a gift from the artist.  This room is also where Bulbuli holds its weekly rehearsals.

We didn’t stay long, however, as Ajka wanted to show us how to get to the Islamic Center where we would eat our meals.

Outside the mosque located in Novi Zagreb

A landmark in Zagreb’s modern quarter, the Islamic Center is an enormous complex, around 10,000 square meters, that encompasses three sections: prayer, social and residential.  It is located in the modern quarter of Zagreb. 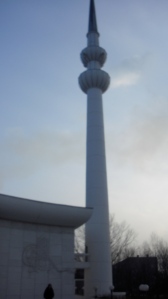 City sources record Muslims in Zagreb from the middle of the 18th century.  Over the centuries the community has been a small, but important minority culture in Zagreb.

Amina at the fine restaurant in the Islamic Center

The restaurant at the Islamic Center is absolutely first class.  Everything tasted delicious and fresh, especially that day, as Amina and I were both famished after our long bus rides to Zagreb, me from Bihac and Amina from Lovran on the coast.

By the time we rode the tram back to Hotel Jadran, we had barely enough time to freshen up before heading to rehearsal for the concert near the Preporod office.   A beautiful intimate performance hall, its whitewashed stucco walls were hung with an exhibition of works by artist Mirza Serdarevic.   Bulbul director Ismet Kurtovic was setting up the sound system and pinning down the final details of the concert order that would include songs by me, Bulbuli, a male singer, and a conversation between President Senad Nanic and I.  It was a lot to balance in a very short amount of time, so nerves were a little frayed at that point.

The smiling faces of Bulbuli’s singers welcomed us as we entered, shaking hands with each one of them.  These women reminded me so much of singers in the choirs I have directed over the years:

regular women, mothers, workers, wives, sisters, daughters, with lots of life experience to put into their singing.  I felt an immediate rapport with them.  Though from two different countries and several cultures, we had common ground as women and as singers. I only wish I could join Bulbuli and sing with them every week! 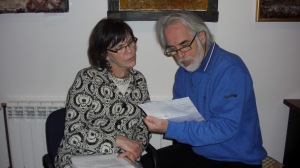 Mr. Kurtovic and I made the final selections of the songs.  Mr. Nanic went over the questions he would pose in our conversation.  Then it was time to see whether we could pull this off.  Remember, the concert was the very next evening and they had never even met me.  What an incredible leap of faith shown by Preporod!  The musicians started playing the forspiel, I came in on the verse and Bulbuli on the chorus.  Magic!  I turned around toward the choir with an enormous grin to find them grinning back.

A match made in heaven!  We had to go over a couple of rough places and correct some text I was singing to match Bulbuli, but overall it fell together very easily thanks to the great preparation of Mr. Kurtovic and Bulbuli.  I returned to my room flying high, unable to sleep for hours.

The next unknown, would anyone attend this mid-week concert?  Held on Tuesday, February 1, on a cold wintery night, it seemed likely that the turnout would be small.  However, we were delightfully surprised as people began to fill up the hall the next evening.  It was standing room only!

My nerves were jangling, my hands actually shaking.  It was an enormous honor to be invited to sing in Zagreb by Preporod.  My voice had cracked several times from sheer exhaustion the day before in rehearsal.

Would I sing well?

Would the people accept an American singing sevdalinke?  Would I be able to answer Mr. Nanic’s questions intelligently and fluently?  I was just this side of terrified.

However, when the music started I let my voice fly on the wings of the beautiful songs and in no time the feeling in the room overflowed with love.  It really seemed as if we were all enveloped in one large heart, so much beautiful emotion was flowing between us all.  Many people were singing along and even crying. The audience was so encouraging and interested in the conversation between Mr. Nanic and me. I was deeply humbled and appreciated this opportunity so much.

A special treat that evening was a solo by Sead Muhamedagic, a blind singer who sang one sevdalinka in the German language.  His resonant voice and tender expression deeply moved all of us.

After the concert, Mr. Nanic invited me to his parents’ home for a wonderful meal.  His father, Kemal Nanic, has enjoyed a fascinating life and entertained me with amazing stories from the many countries in which he lived.

I couldn’t be more impressed with this family’s decades long commitment to their community.  It was a delightful evening.

As we were leaving, Mrs. Nanic gave me a delicate black silk scarf, beautifully and tastefully sequined.  I wore it recently at the prayer service in a Seattle mosque for a man I’ve known since 1970, rahmetli Omar Batiste.   I love the symbolism of wearing this scarf, linking an old friend and new, and in a way, the Seattle and Zagreb mosques.

Skipping ahead a couple of days, Bulbuli invited me to their Friday rehearsal on February 4.  Little did I know they had planned a party!

Can you believe how sweet?

The long table in the Preporod office was covered with food and beverages including a chocolate cake with my name on it.  They really touched my heart.

I had stopped at the flower market on the way to Preporod and picked up 30 tulips, one for each singer, which I passed out with a hug and kiss.  It truly was bittersweet because I adored them, yet knew that in just a few hours we would be saying farewell.  Trying to put that ‘sevdah’ feeling aside, we celebrated the concert’s success by eating, singing and even dancing a few kolos!  Now I have the beautiful Zagreb heart they gave me hanging on the wall by my computer, a daily reminder of our wonderful time together.

As I run errands in my car here in Seattle , I listen to Bulbuli’s fine CD.  The women sing excellently in simple 2-part harmony and the musical arrangements are absolutely fantastic.  Arranged by their talented director, Ismet Kurtovic, the music reflects his rock background.  For years he was a member of the popular Yugoslav group Drugi Nacin.  Mr. Kurtovic also wrote the song Mojoj Dragoj BiH which is practically an anthem.  It is a very good thing I didn’t realize who he was until after the concert.  If I’d known before that, I would have been paralyzed with celebrity shock.

This fun evening came to an end all too soon.  The only comfort is I have a feeling Bulbuli and I will be singing together again.  I’m ready!  Thank you Amina Alijagic, Senad Nanic, Ismet Kurtovic, Bulbuli, Preporod and your Zagreb community for your generosity and kindness!  Srce puno Zagreba!