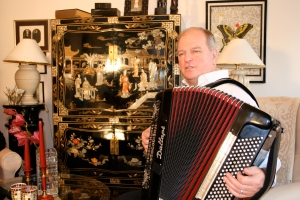 January 20, 2010, I remember getting the call.  Omer Pobric had died.  What?  My mind reeled with the news.  Not Omer!  He was a living legend, bigger than life, father, husband, brother, composer, writer, patriot and producer; one of the most productive individuals under the sun.  Omer was one of those people who you expect will live forever, but God chose a different fate for him.  I didn’t take photographs at the memorial, however readers can see photos from happier times here: http://www.marysherhart.com/2006stories.html

He was driving home on the freeway back to Mulici from Sarajevo.  He reached over desperately trying to find his heart medication as the pain wracked his chest.  He managed to pull over, but wasn’t able to get the pill before it was too late.

Here I was a year later, en route to participate in a memorial program on Visoko TV, the day before the religious service.  Esmer Pita, my friend and  Omer’s former cameraman, picked me up in Sarajevo.  As we passed one overpass on the freeway, he pointed out the place Omer took his final breath.  My chest clutched as I looked out upon the icy scene and imagined Omer’s fear and then acceptance of God’s will.

However, it wasn’t until the night of the religious service on Saturday, January 22, that it really hit me.  I traveled with Omer’s great friend and Bosnian hero Jasmin Odobasic. 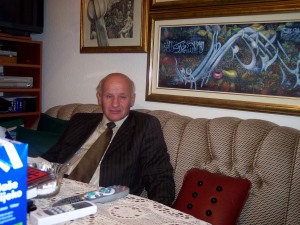 The weather was frigid in Sarajevo and the roads treacherous, as we drove from Sarajevo to visit Omer’s grave before the service started that evening.

We parked and walked across the busy highway into the cemetery’s entrance, the path leading first through the Christian headstones and then into the Moslem section.  Jasmin left me for a few minutes while he located Omer’s grave.  After several minutes I heard his voice from a distance calling me to the grave.  I felt as if caught in a Bergman film, black trees, white snow, stumbling over the uneven ground hidden below the deep snow, catching myself on the headstones, black birds flapping overhead, sounds of a funeral at a distance.   I wanted to see the grave, to say goodbye to Omer, but dreaded the sight.  Yes, we all must go, but still it was a shock to see Omer’s grave.  In the Moslem tradition, his headstone is a simple marker symbolizing our equality in death.

Mr. Odobasic graciously left me alone at the grave for a few minutes to say goodbye and pray.

Omer and I had had a complicated relationship that started well and ended with him cutting off contact with me.

I traveled to Bosnia from Seattle, halfway around the world, in the dead of winter to try to make it right, something I had failed to do when he was alive.

My love for him and his family had never waned, though our misunderstanding will remain one of the saddest burdens I carry in this lifetime.

Jasmin and I were silent as we got back in the car and drove the next few miles to Mulici where the Sevdah Institute Omer Pobric and the Pobric home are located.  The confusing roadwork around Visoko, the ice and falling snow, the horrible smell of the leather factory, all contributed to the surreal feelings we were both having.

As we entered Mulici, my stomach was a knot.  As I walked into the Pobric’s courtyard the first person I saw was Omer’s dear wife, Munevera.

Munevera Pobric on right with a friend in 2007

Our eyes met as we walked toward one another.  Her arms reached out and encircled my neck as she buried her head into my shoulders and wept.  Next, was Omer’s daughter Zlata Pobric Sojko whose reaction was similar.  I was struck by their strength as they nearly immediately fought back the tears to regain composure.  Seeing Zlata’s kids Ali and Esma four years older than the last time I’d seen them made me jump for joy.  We had had so much fun playing together on my past visits.  They had grown up so much.

For me, having lived with the Pobric family while recording with Omer for two months in 2005 and 2007, it was nearly impossible to imagine the family without him.  He was a great man whose passion for music defined their lives.  Munevera constantly cooked and served the daily guests to the Sevdah Institute, in any given day that could mean up to five different groups.  She lovingly made up Omer’s bed every evening and helped him change his t-shirts several times a day during the hot summer months.  Zlata’s two children adored Grandpa Omer and he loved them without boundaries.  If they were in the same room together, he was holding, kissing and playing with them.  Omer helped Zlata and her husband Hajrudin as a loving and committed father would.  He was the family’s North Star. 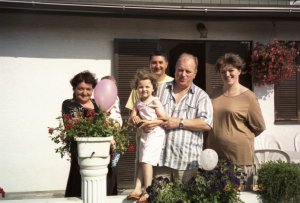 It was such a privilege to be at the one-year memorial service, to bear witness to such an intimate moment in the family’s life.  The women gathered in the Pobric home while the men and imams took their places in the cardak, a sound system linking the two buildings. The experience is too sacred to describe in detail here, but I will never forget the quiet prayers of the women’s whispered voices, the sound like a rainstick, the tears, the profiles of women in deep prayer and reflection, my eyes exchanging loving glances with little Esma’s, and the sight of a mother holding her little girl so tenderly.  It will remain a singular moment in my life.  After the service concluded, the women went into a flurry of activity bringing out dish after dish of delicious food and desserts – food, the universal expression of community and love.

Speaking of community, directly across the street from the Pobric home lives the Begovic family.  I met them during my first month in Mulici in 2005 and we’ve stayed in touch ever since.  This family, like so many in Bosnia, faced enormous troubles during and after the war, however, their strength has kept the family strong, their three beautiful children healthy and at the top of their school classes.  One of their children, Mirnesa, is an extremely talented writer.  She has published two books, earned awards and promises to be one of Bosnia’s notable literary figures.

Despite the sadness of Omer’s memorial, I was so much looking forward to seeing them, perhaps having a coffee, however it was not to be.  Fate played another sad card.  The very day of Omer’s memorial, they were at the cemetery saying goodbye to one of the grandmother’s, the one who Mirnesa’s mother Merhima cared for so diligently over the past years.  I did go over to the Begovic home, but stayed for just a moment.  The family was in mourning and deeply distressed.  I hope we will meet again during happier circumstances for I love them very much.

Finally, the evening was over and it was time to take our goodbyes after a brief visit with old friends like Hamza and Fehta.  The snow had been falling throughout the evening and was still coming down.  The 25-minute drive back to Sarajevo turned into a 2-hour white knuckled journey on sheet ice.  By the time I arrived to the comfort of Guesthouse Halvat, my emotions were frayed like an electric wire.  I was filled with gratitude, sadness, exhaustion, and relief for the love that the Pobric family had met me with, for being welcomed back.  Thank you, Munevera and Zlata.  God bless you and your dear family.

This is the third in an 8-part series of articles about the generosity and kindness I received in Bosnia and Croatia on a 3-week trip in Jan-Feb 2011.  These articles are published in Bosnian at the Bosnian Media Group.  All the photos of the trip can be seen at my photo blog.  Photos from previous trips and more can be seen on my website.